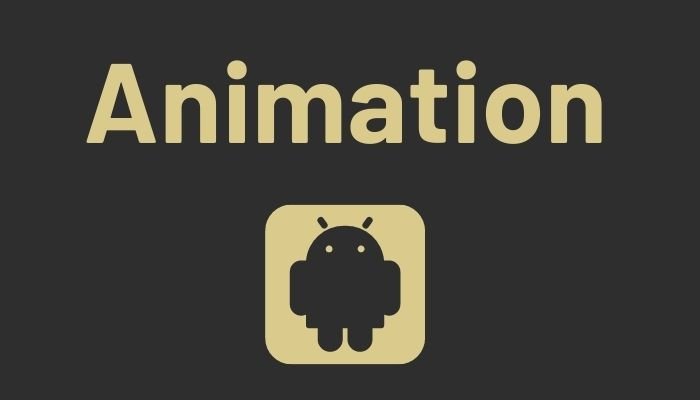 In this tutorial, we will learn what is Animation and why we use animation, what types of animations are? with detail or step-by-step explanation.

The technique of creating the illusion of a moving object by displaying a series of discrete images that change over time, such as:

As well as millions of mobile games with character, environment, and user interface animations.
Each image in an animated sequence is referred to as a frame. The frame rate is the rate at which those images appear on the screen. Ideally, your frame rate should be close to the refresh rate of the screen.

Why is animations important?

Animation is significant because it allows us to tell stories and communicate emotions and ideas in a unique, easy-to-perceived manner that both young children and adults can understand. In ways that writing and live-action films cannot, animation has helped to connect people all over the world.

Types of animations in Android

The following animation systems are available in the Android framework:

View animation is a system for animating views, as the name suggests. It is an older system that only supports View objects. It is relatively simple to set up and provides sufficient capabilities to meet the needs of a wide range of applications.

The property animation system allows you to define the following animations characteristics:

Material Design promotes vibrant animations that capture the user’s attention while behaving more naturally. Most motion in nature is not linear and changes over time. A rolling ball, for example, will be slowed by friction, whereas a vehicle will gain speed as it moves forward.

The Android API includes predefined interpolators that are ready to use:

Drawable animation allows you to create an animation by loading a series of Drawable resources one after the other. This is a traditional animation in the sense that it is made up of a series of different images that are played in order, similar to a roll of film.

An XML file is the simplest way to generate drawable animations. Save the file in the res/drawable directory.

The root node of the XML file is an <animation-list> element, and the child nodes are a series of <item> nodes that each define a frame: a drawable resource for the frame and the frame duration. An example XML file for a Drawable animation is provided below:

This animation is made up of three frames. When the android:oneshot attribute of the list is set to true, it will cycle once before stopping and holding on to the last frame. The animation will loop if android:oneshot is set to false. This XML, saved as rocket thrust.xml in the project’s res/drawable/ directory, can be added as the background image to a View and then called to play. Here’s an example activity in which the animation is added to an ImageView object and is triggered when the screen is touched.

Physics-based animation employs physics laws to achieve a high level of realism in animation. When a change occurs in our daily lives, it is accompanied by a physical transition that we are able to recognize.
Physics-based animations are propelled by force rather than by fixed durations and changes in animation values. When the force reaches equilibrium, the animation comes to a halt. This results in more natural-looking animations as well as the ability to change an animation while it is still running without causing visual disruption.

In summary, physics-based animations have the following advantages:

Listview in Android with example | Kotlin

Data Binding in Android with Example