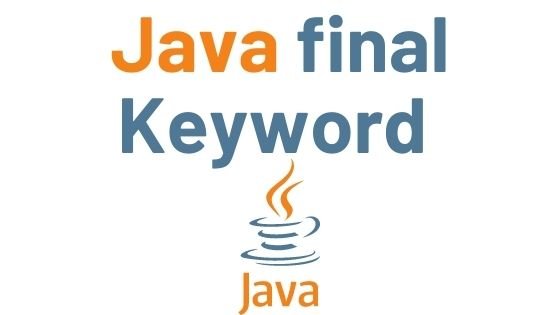 In this tutorial, we will learn about the final keyword in java:

what is the final keyword in Java?

Constants are denoted by the final keyword in Java. Variables, methods, and classes can all be used with it. Once a variable, method, or class has been declared final, it can only be assigned once. That is to say,

The Java final keyword is a non-access specifier that is used to limit the scope of a class, variable, or method. If we use the final keyword to initialize a variable, we cannot change its value. If we declare a method to be final, no subclasses can override it.

When we run the program, we will receive a compilation error with the message shown below.

Some or all of a class’s methods can be declared final. In a method declaration, the final keyword indicates that the method cannot be overridden by subclasses.

In the preceding example, we created a final method called display() within the Sample class. The Sample class is inherited by the Main class in this case.

In the Main class, we attempted to override the final method. When we run the program, we will receive a compilation error with the message shown below.

A final class is one that cannot be extended in any way. Methods can also be marked as final to indicate that they cannot be overridden by subclasses. Preventing the class from being subclassed could be especially useful if you write APIs or libraries and don’t want them to be extended to change the base behavior.

In the preceding example, we created a final Sample Class. In this case, we attempted to have the Demo class inherit the Sample class.

When we run the program, we will receive a compilation error with the message shown below.

Java this Keyword with Example

Hope this article will guide you to recognize all about the Java final keyword with Examples that you needed and still if you have any problem or queries regarding this, post them in the comments section and we will be glad to assist you.