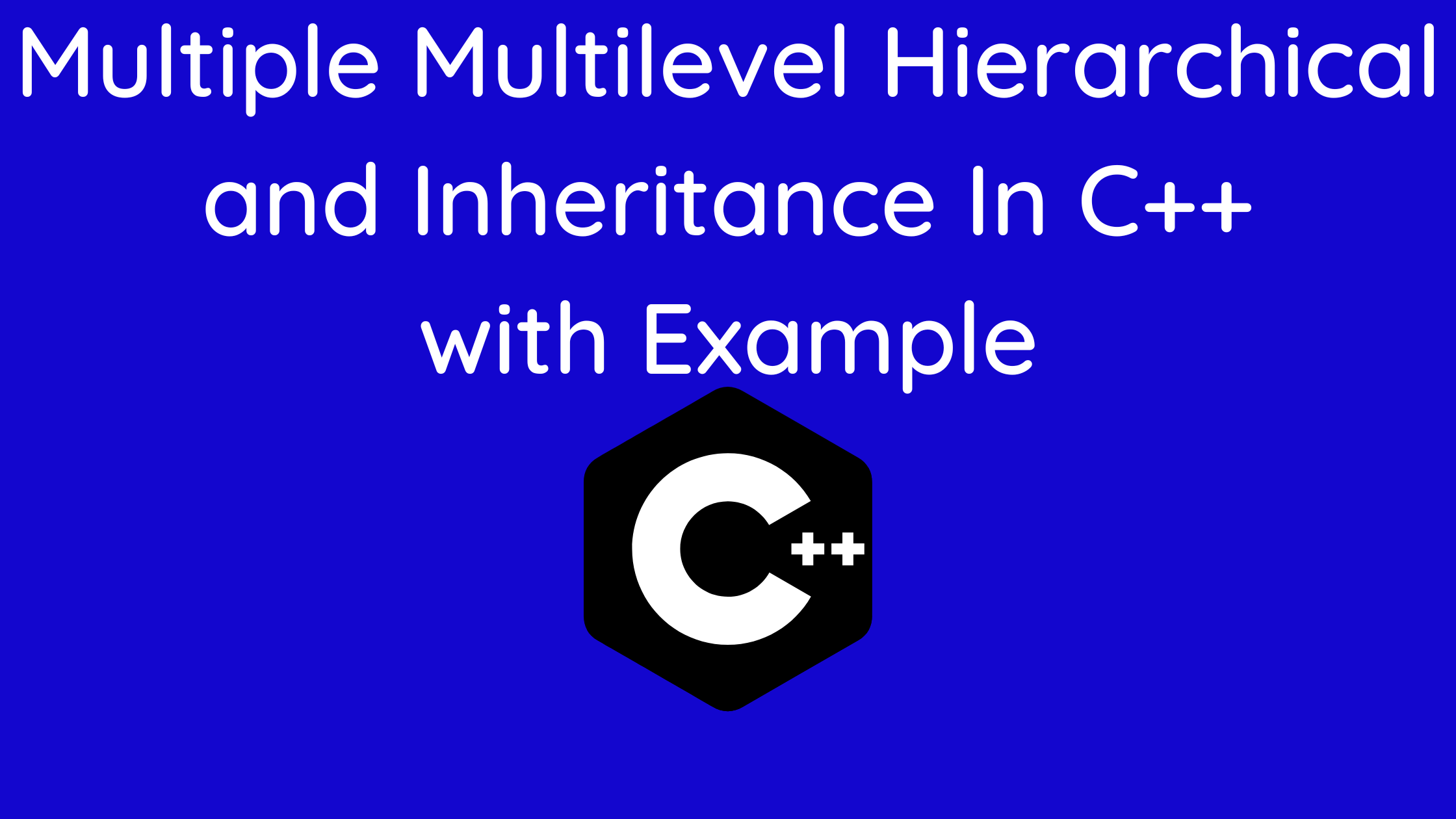 Using examples, we will learn about the many inheritance models used in C++ programming, including multiple, multilevel, and hierarchical inheritance.

The derived class can utilize the base class’s properties thanks to inheritance. It is an element that object-oriented programming must have.

In more precise terms, we can say that inheritance occurs when a base class object immediately inherits all of the parent object’s properties and when we can access the parent class’s features using a child object.

One of the four cornerstones of object-oriented programming is inheritance (OOPs). A class can acquire the traits and properties of another class thanks to this functionality.

Because the derived class or the child class can reuse the members of the base class by inheriting them, inheritance enables code reuse.

To comprehend the idea of inheritance clearly, think about a real-world illustration. The capacity to speak, walk, eat and other abilities are only a few of the traits that a child receives from his or her parents.

Once more, this mammal class inherits these traits from the animal class. The same principles govern inheritance.

Depending on the visibility option selected, the data members of the base class can be accessible after being copied via inheritance. Accessibility is always arranged in descending order, from public to protected. This article will primarily cover five different types of inheritance in C++. These are what they are:

One essential component of an object-oriented programming language is inheritance. It enables programmers to derive a new class from an existing one. The base class’s features are passed down to the derived class (existing class).

In C++ programming, there are several inheritance models to choose from in Multiple Multilevel Hierarchical Inheritance.

In addition to being able to derive a class from the base class in C++ programming, you can also do so from the derived class. Multilevel inheritance is the name given to this inheritance type.

Multilevel Inheritance is the process by which a class can be descended from another descended class. A, B, and C are the three classes, let’s say.

The base class that class B derives from is A. B is hence A’s derived class. The class that comes from class B now is C.

As a result, class B becomes the foundation class for class C while also deriving from class A.

Multilevel Inheritance is the name given to this situation. According to the defined visibility modes, each respective derived class has access to the data members of its respective base class.

Class C in this program is descended from class B. (derived from base class A).

The main() function defines the obj object of class C.

Additionally, the function is absent from class B, therefore the compiler searches for it in class A. (as B is derived from A).

If the show() function is present in C, the compiler overrides the class A display() (due to the member function overriding).

A class in C++ programming can originate from several parents. For instance, the base classes Mammal and WingedAnimal are the ancestors of the class Bat.

It makes sense because a bat is both a mammal and an animal with wings.

At the point of inheritance, it provides access specifiers independently for each base class.

The combined features of all these classes can be derived by the derived class, and the derived or child class can access the data members of all the base classes in accordance with the access specifiers.

Mammals can give direct birth.
Winged animal can flap.

When a function is overridden, multiple inheritances are the most obvious issue.

Let’s say that two base classes share a function that isn’t changed by derived classes.

The compiler displays an error if you attempt to call the function using an object from the derived class. It is a result of the compiler not knowing which function to call. For instance,

The scope resolution function can be used to resolve this issue by indicating which function should be classified as base1 or base2.

Hierarchical inheritance is the process of more than one class deriving properties from the base class.

All characteristics shared by child classes are included in the base class under hierarchical inheritance.

For instance, Science class is the foundation for Physics, Chemistry, and Biology. Dog, Cat, and Horse are also descended from the Animal class.

Hierarchical inheritance is the process of passing down several derived classes from a single base class.

Due to the fact that each class serves as the base class for one or more child classes, this inheritance has a tree-like structure.

Each derived class’s visibility mode is individually selected during inheritance, and it accesses the data members accordingly.