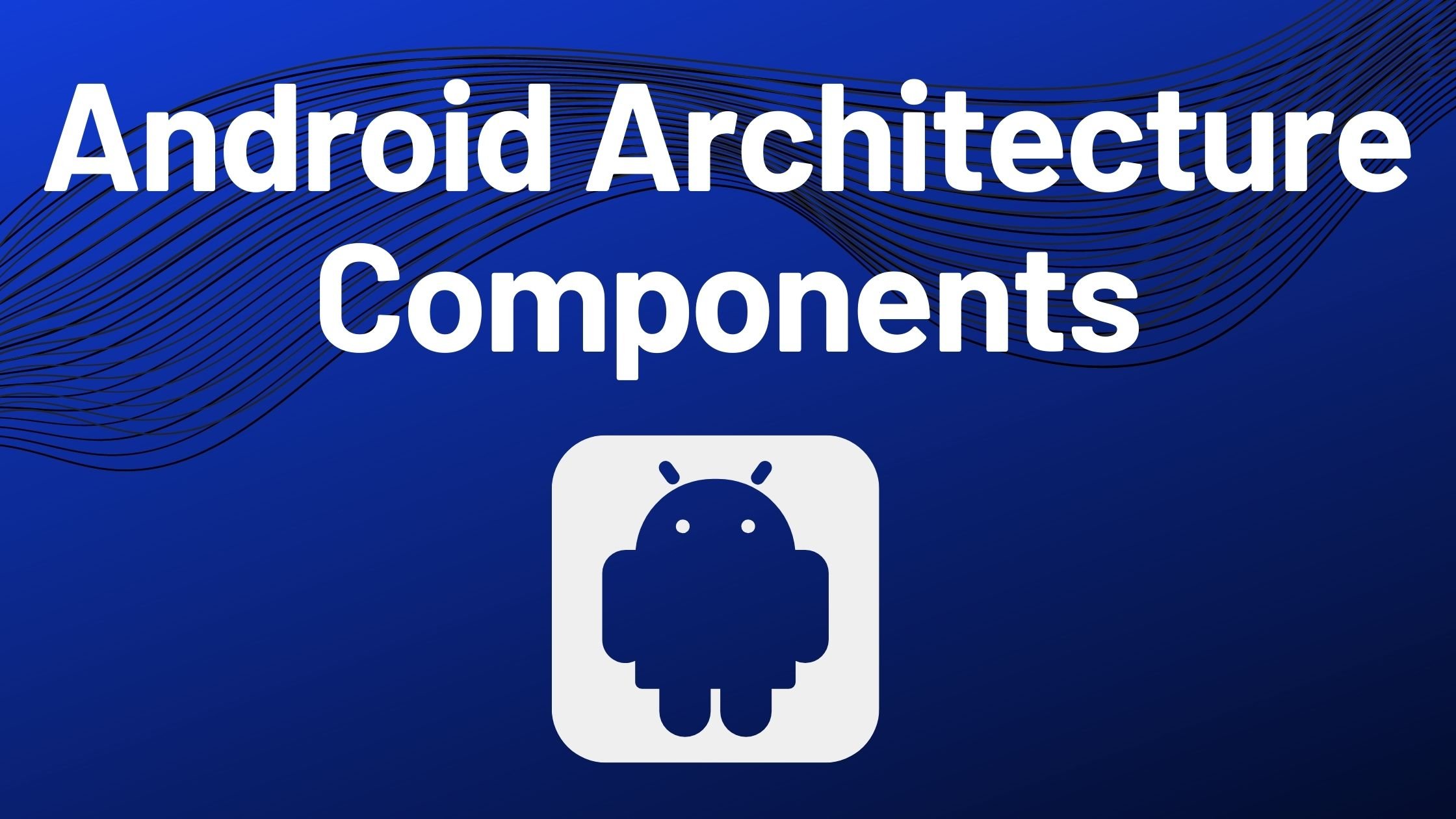 In this tutorial, we will learn about Android Architecture Components: App architecture design is very important for ensuring that your apps are robust, testable, and maintainable. Android includes a set of libraries and components to assist you in building your app in accordance with best practices. We’ll also look at some simple snippets written in Kotlin, an amazing language that is now officially supported by Android.

What is Android Architecture Components?

The Android Operating system aggressively manages resources to perform well on a wide range of devices, which can make it difficult to build robust apps. Android Architecture Components guide app architecture by providing libraries for common tasks such as lifecycle management and data persistence.

To introduce the terminology, here is a brief overview of the Architecture Components and how they interact. Each component is discussed in more detail in the following section. This diagram depicts a simplified version of this architecture.

Entity: An entity is an annotated class that describes a database table when working with Architecture Components.

SQLite database: Data is stored on the device in an SQLite database. Additional storage options, such as a web server, are omitted from this chapter for clarity. This database is created and maintained for you by the Room persistence library.

DAO stands for data access object: A function-to-SQL query mapping. Previously, these queries had to be defined in a helper class, such as SQLiteOpenHelper. When using a DAO, you call the methods and the components handle the rest.

Room database: A database layer on top of an SQLite database that handles everyday tasks that you would normally handle with a helper class like SQLiteOpenHelper. Allows for more convenient local data storage. The DAO is used by the Room database to send queries to the SQLite database.

Repository: A class that you can use to manage multiple data sources, such as the QuoteRepository class.

ViewModel: Provides data to the UI and serves as an intermediary between the Repository and the UI. Hides the backend from the user interface. ViewModel instances survive changes to the device’s configuration.

LiveData: A data holder class that follows the observer pattern, which means that it can be observed. Always holds/caches the latest version of data. Notifies its observers when the data has changed. LiveData is lifecycle aware. UI components observe relevant data. LiveData automatically manages to stop and resuming observation, because it’s aware of the relevant lifecycle status changes.

The diagram below depicts the same basic architecture form as the one above, but in the context of an app. The following sections get in full depth about each component.

To use the Architecture Components libraries, you must manually add the latest version of the libraries to your Gradle files.

Add the following code to your build.gradle(Module: app) file, below the dependencies block:

Use the current version numbers

You must provide Room with information that relates the contents of the entity’s class (for example, Person) to what you want to represent in the database table in order for Room to work with an entity. This is accomplished through the use of annotations.

@Entity(tableName = ‘Quote table’) Each @Entity instance represents a table entity. Annotate your class declaration to tell Room that it is an entity. If you want the table’s name to be different from the class’s name, enter it here.
@PrimaryKey Every entity necessitates the use of a primary key. Add and annotate a primary integer key with autoGenerate=true to auto-generate a unique key for each entity, as shown in the code below. See Using Room entities to define data.
@NonNull Indicates that the return value of a parameter, field, or method can never be null. The @NonNull annotation should always be used on the primary key. This annotation should be used for mandatory fields in your rows.

@ColumnInfo(name=”quote”) If you want the column name to be different from the name of the member variable, specify the name of the column in the table.
Every field in the database that Room can access must be either public or have a “getter” method. Rather than exposing member variables directly, the code below provides agetQuote() “getter” method.

You can also use annotations to define relationships between entities.

You use data access objects, or DAOs, to access the data in your app using the Room persistence library. A Room database is built around a collection of Dao objects (DAOs). Each DAO contains methods that provide abstract access to the database of your app.

You annotate the DAO with SQL queries that you associate with method calls. The compiler validates the SQL and then generates queries based on the annotations. The libraries provide convenience annotations for common queries, such as @Insert, @Delete, and @Update.

When you display data or use data in other ways in your app, you usually want to take action when the data changes. This implies that you must monitor the data so that you can respond when it changes. This can be difficult depending on how the data is stored. Observing data changes across multiple components of your app can result in explicit, rigid dependency paths between them. This makes testing and debugging difficult, among other things.

LiveData is a pattern in the architecture. It’s essentially a data holder for primitive/collection types. When it is active, it is used for observing changes in the view and updating the view. As a result, it is aware of the lifecycle.

If you are interested in learning more about LiveData, you can go through LiveData in Android with Example here I have explained LiveData in detail with suitable Examples in Android, and several scenarios in which LiveData can be useful. and I assure you that by the end, you will have a clear understanding of this commonly used technology.

You can use LiveData separately from Room, but you must manage data updates. However, there are no publicly accessible methods for updating the stored data in LiveData.

As a result, if you need to update the stored data, you must use MutableLiveData rather than LiveData. The MutableLiveData class includes two public methods for setting the value of a LiveData object: setValue() and postValue().

In most cases, MutableLiveData is used in the ViewModel, and the ViewModel only exposes immutable LiveData objects to the observers.

Create an observer of the data in the onCreate() method of MainActivity and override the observer’s onChanged() method to update the data shown to the user. When the LiveData changes, the observer is notified and the onChanged() function is called. The cached data is then updated, for example, in the adapter, and the adapter updates what the user sees.

The following code shows how to attach an observer to LiveData:

Room is a database layer on top of an SQLite database. The Room takes care of mundane tasks that you used to handle with an SQLiteOpenHelper.

Take note of the following:

Here’s an example of an entire Room class:

A Repository is a type of class that abstracts access to various data sources. The Repository is not a component of the Architecture Components libraries, but it is a best practice for code separation and architecture. A Repository class is in charge of data operations. It provides a clean API for app data to the rest of the app.

A Repository manages query threads and enables the use of multiple backends. In most common cases, the Repository implements the logic for deciding whether to fetch data from the network or use database results cached locally.

Here’s the complete code for a simple Repository:

A ViewModel stores your app’s UI data in a lifecycle-aware manner that is resistant to configuration changes. Separating your app’s UI data from your Activity and Fragment classes allows you to better adhere to the single responsibility principle: your activities and fragments are in charge of drawing data to the screen, while your ViewModel is in charge of holding and processing all the data required for the UI.

Lifecycles are associated with the majority of the app components defined in the Android framework. The operating system or framework code running in your process manages lifecycles. They are fundamental to how Android works, and your application must adhere to them. Failure to do so may result in memory leaks or even application crashes. Lifecycle-aware components include activities and fragments, and LiveData is also lifecycle aware.

Implementing the actions of the dependent components in the lifecycle methods of activities and fragments is a common pattern. For example, you could have a listener class that connects to a service when the activity begins and disconnects when it ends. You then override the onStart() and onStop() methods in the activity to start and stop the listener.

The android.arch.lifecycle package contains classes and interfaces that allow you to create lifecycle-aware components that automatically adjust their behavior based on an activity’s or fragment’s lifecycle state. That is, you can make any class aware of its lifecycle.

Use cases for lifecycle-aware components:

Connectivity to the network can be started and stopped.

Use lifecycle-aware components to enable live updating (streaming) of network data while an app is in the foreground, then pause the app when it moves to the background.

Animated drawable can be paused and resumed.

Use lifecycle-aware components to pause animated drawable while the app is in the background and resume them when the app returns to the foreground.

The paging library allows your app to gradually load information from a data source as needed, without overloading the device or waiting too long for a large database query.

Many apps work with large amounts of data but only need to load and display a subset of that data at a time. An app may be capable of displaying thousands of items, but it may only require access to a few dozen of these items at a time. If the app is not carefully designed, it may request data that it does not require, putting a strain on the device and the network. If the data is stored or synchronized with a remote database, the app may become slow and consume the user’s data plan.

The paging library addresses issues with existing solutions. This library contains several classes that will help you request data as you need it. These classes also pair up with pre-existing Architecture Components such as Room.

The Data Binding Library is an Android Jetpack library that allows you to bind UI components in your XML layouts to data sources in your app using a declarative format rather than programmatically, reducing boilerplate code. It can be categorized into 2 types i.e.

View binding allows you to replace findViewById with generated binding objects in order to simplify code, eliminate bugs, and avoid all of the boilerplates of findViewById(). It is used to make working with views extremely simple and reduces a lot of boilerplate code, making it very simple to work with views and perform operations on them.

How to Create Calculator App with Example in Android

Glide library in Android with Example